One of the Most Common Innovation Blockers: “We’ve tried that Before” 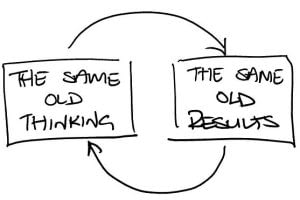 We have all been in THAT meeting.  Your team is bouncing around ideas, and someone comes up with something that sounds promising.  Less than ten seconds later someone says, “We’ve tried that before, and it didn’t work.” Language like this carries a heavyweight as we tend to overvalue what is commonly referred to as historical dominant logic.  Every day that your museum is operating the accumulations of the day’s experiences creates a permanent residue.  Think of it like painting half of a tennis ball and threw it against a wall once a day. Some days, the paint side will directly hit the wall and make a significant impression, other days only a small light dash of paint will impress the wall.   The accumulation of these experiences is your organization’s historical dominant logic.  Historical dominant logic influences perceptions and actions including (but not limited to) language and communication, daily activities, core beliefs, and ultimately, how decisions are reached.  Historical organizational knowledge is functionally important, but it can also hinder effective strategic planning if contextually misused.  This article will discuss why overvaluing historical dominant logic will hinder your ability to make sound strategic decisions, especially *nonlinear strategic choices.

The biggest fallacy at the heart of the sentiment, “We’ve done that before,” is that it assumes your organization’s historical successes and failures were completely the result of your internal actions without external business forces playing a role.  When you have a program become successful, several things have aligned to make this occur.  You captured an unfilled need in the market that you can profitably and uniquely fill AT THAT MOMENT IN TIME.  The business climate around you is always changing.  What worked (or didn’t) three years ago has limited relevance to what will work today.  In 2020, there is high demand for facial masks. If we had tried to sell them in 2018, there would have been no market.  Market forces such as competition, economics, technologies, social and cultural influences, and more are relevant to every program’s potential success.  As Heraclitus stated over 2000 years ago, “You cannot step into the same river twice.” The business climate in which you ‘tried it before’ does not represent the business climate you are functioning in today.

The second fallacy related to historically dominant logic is an oversimplification of past programs.   While the previous project to which the groups naysayer refers when he says “We’ve done this before, “probably had some elements common to what you are currently discussing, in most cases, they remember only a small part of a more significant project and the similarities are limited.  From concept to implementation, there are hundreds of variables that make up a project.  The person playing the “We’ve don’t the before” card is only remembering the headlines.  This is the key to the fallacy.  While your current potential project may share some elements with the previous one, don’t let this oversimplification block you from discovering what may be a possible big win lying underneath.

As mentioned above, most of the time, when someone ‘remembers’ a previous project, they only remember a few aspects that stuck out, similar to how people remember the big play in the sporting event they attended or the excellent encore performance at the concert.  Our brains are hardwired to remember the most extreme highs and lows as we experience these moments both logically and emotionally.**  I was in a planning session a few years back in which a person in the meeting said, “We tried fundraising on Facebook before, and it didn’t work.” What he remembered was the organization posting on Facebook promoting a fundraising campaign that was landing page driven.  The conversation the organization was actually having related to using Facebook for Nonprofits.  While both programs were associated with Facebook, they are quite different.

When someone says some version of, “We’ve done it before, and it didn’t work,” first and foremost, do not let the assertion suffocate the conversation, treat it like any other viewpoint.   As we discussed above, historical dominant logic is frequently given more credibility than it should receive.  This is particularly common when the naysayer is either formally or informally more influential than the person that presented the original idea.  Instead, go deeper into what is being proposed, including the development, implementation, and marketing.***

Some of the best ideas in history were first rejected because people over-relied on historic dominant logic when assessing the idea.  Navigating the hurdles created by the pandemic necessitates creative strategy and implementation.  To optimize your results during this fast-evolving time, you must avoid fallacy traps that will hinder your progress.  One of the most common ones is overvaluing the people’s recollections of the past.

**I recommend a book called “The Power of Moments” by Chip and Dan Heath to everyone in the tourism industry. An excellent discussion of how humans process experiences.  It’s relevant to this article as they discuss what makes specific moments stick in our long-term memories.

***If you are struggling to have effective brainstorming sessions, read this article next, “How to Have Better Meetings and Make Winning Decisions Every Time,”